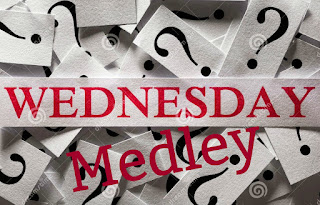 Click here to join Terri and friends for the Wednesday Medley.

1.  I'm sure many kids today have no idea what V-J Day is all about.  Did you have a loved one who fought in WWII?
I believe 2 of my uncles were in the service during the war, but I’ve never heard any of their stories.  I wish now I had asked them.

2.  The iconic sculpture from the famous photograph of  "The Unconditional Surrender" has been defaced recently because of the #metoo movement. I know we can get very political about this subject, but just keeping it in the spirit for which it was created, what are your thoughts? 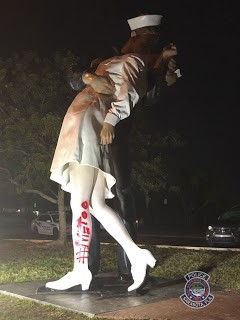 I think that statue is so cool and I really hate to see that it’s been defaced.  I have no comment I wish to make here about this movement.

3.  Terri's grandson, Tristan, loved playing a game called "Axis & Allies".  It was quite complicated, took up the entire dining room table, and was not something Terri wanted to play (Grandpa understood it and played though).  Can you name three Axis countries and five of the many Allies (okay to look it up!)?
Never heard of that game and I don’t know the answer right off the top of my head, I had to look it up.  Here’s the answer I found “World War II (1939–1945) Axis powers (Germany, Italy, Japan, Hungary, Romania, Bulgaria) versus Allies (U.S., Britain, France, USSR, Australia, Belgium, Brazil, Canada, China, Denmark, Greece, Netherlands, New Zealand, Norway, Poland, South Africa, Yugoslavia).”

4.  Terri was surprised to learn that most historians agree that WWII began when Germany invaded Poland on September 1, 1939. Others say it started when Japan invaded Manchuria on September 18, 1931. And some scholars suggest WWII is actually a continuation of WWI, with a break in between.  Have you ever visited Pearl Harbor in Hawaii or any other WWII memorials around the world?
I was privileged to visit the World War II Memorial in Washington DC as a chaperone on a school trip with my oldest daughter.

5.  Calvin Graham was only 12 years old during WWII when he enlisted in the U.S. Navy. He won a Bronze Star and a Purple Heart before the Navy found out how old he was.  (God bless him.) Terri doesn't know any 12-year olds today who could qualify or get away with something like that.  Times are so very different now but (in the US) we do have ROTC in high schools.  Do you know anyone who started in ROTC and went on to enlist in one of the services?
Yes, the daughter of  one of my friends is currently in boot camp after being involved in ROTC in high school.

6.  Please tell us something about your week so far.
It’s been a good week.  Church Sunday, and work on Monday and Tuesday and Wednesday too.  It’s been really nice to have time at home to relax in the evening (even in the midst of doing laundry).  I’m enjoying working on a crochet blanket I’m making for my hubby.  Plans are for it to be approximately 8’x8” when completed.  Currently it’s about 8’x1'.  Obviously, I’ve got a long way to go!  lol 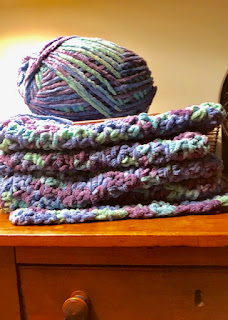 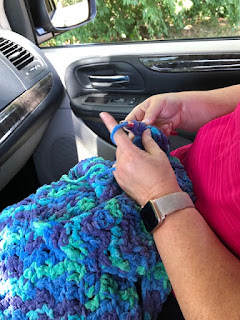 The first picture is the truer color.