Our family is in the midst of raging storms right now.  But I am thankful because I know God is in control and I know that He has a plan.  Now, my job is to trust Him.  And even with that, I know He will help me to trust Him.

So my thanks today is that God has a plan.  God is with us.  God never changes.

Email ThisBlogThis!Share to TwitterShare to FacebookShare to Pinterest
Labels: Thankful Thursday, Thanks

Today is Thursday and it's time to be thankful!  While we should always be thankful, Rebecca Jo from Knit by God's Hand has started this meme to help us to be intentional about our thanks, especially on Thursday.  So make a post of your thanks and link up here.

So today, I'm thankful for God's creation.  The sky always fascinates me.  Hubby pointed out these clouds to me today and said I should take a picture.  I think he's right.   Hubby said they are some type of phenomenon that doesn't occur to often.  I don't know about that.  But they remind me of a washboard for some reason.  So thank you Lord for showing us such beautiful things in your creation.  The skies may be a little grey and it's pretty chilly today, but at least it's not raining or snowing.  And besides, I know on the other side of those clouds, the sun is still shining brightly!!!  Thank you Lord for your sun and for your Son!! 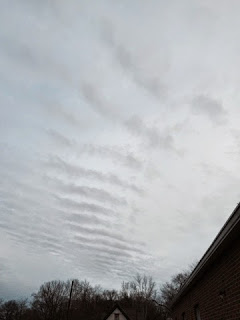 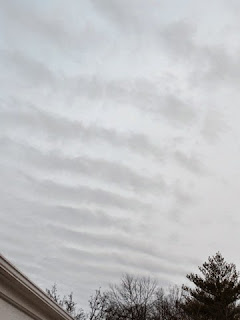 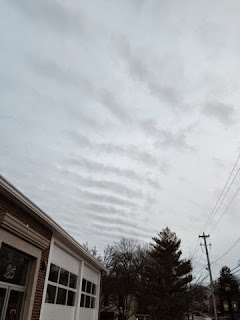 1. Share a favorite song, book, or movie title containing the word green?
How about "Green Eggs and Ham" which is one of my favorite Dr. Seuss' books.

5. It's National Celery Month...are you a fan? If so, what's a snack or dish you enjoy that calls for celery?
I am not a fan at all.

6. What's one thing you wish you'd learned sooner?
To truly believe God when He tells me who I am in Him.

7. Would you like to own a second home? If so where would you want that home to be?
Sure.  Some place I can see the ocean from.  Probably Florida or South Carolina.

8. Insert your own random thought here.
The Gideon Bible Study by Priscilla Shirer is really good.  I would definitely recommend it. 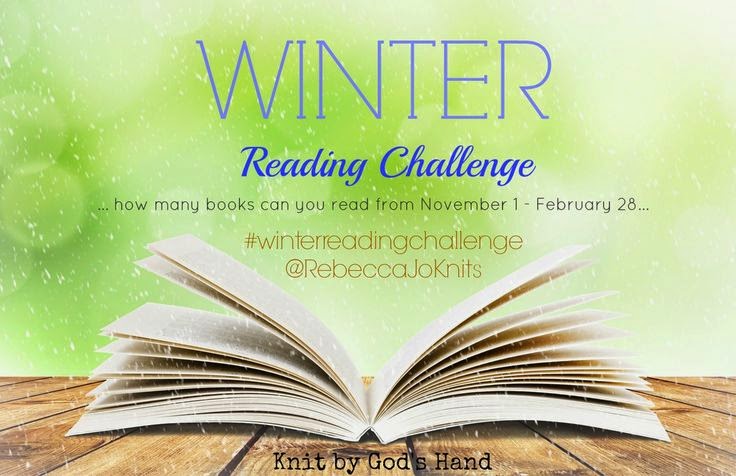 This is the final post for the Winter Reading Challenge this year.  So tell us what you read and then link up at "Knit By God's Hand".  I really haven't done a lot of reading this month.  Life is just a little to hectic right now.  Plus I've been spending a lot of my free time knitting.  So these are the audio books I've listened to while working.  I'm still reading C.S. Lewis' Book, "The Lion, the Witch, and the Wardrobe.  Hoping to finish that soon.

"Bossypants" by Tina Fey.  Rebecca had this book on her site earlier in the challenge and liked it, so I got on the waiting list at my library for the audio version. I finally got it and listened while working.  It wasn't my favorite, but there was some pretty funny stuff in it. I think I just haven't ever really watched Tina Fey that much on TV except for when she played Sarah Palin.  I think she is very good and funny at that.  If you happen to like Tina Fey a lot, then you may like this better than I did. But I would say, beware there is some pretty raw language from time to time.

"Daisy Chain" by Mary DeMuth.  This is another book I got in the audio version from my Library.  It's pretty interesting.  It's about a small, poor town in Texas called Defiance and about a young girl named Daisy that suddenly goes missing.  Her best friend is a boy who's father is the town preacher. The boy's name is Jed and this story is mostly from his point of view.  He thinks it is his fault that the girl is missing and her mother blames him too.  It definitely kept me guessing the whole time, trying to figure out what happened to the girl.

"A Slow Burn" by Mary DeMuth is the 2nd in the series to the above book.  I'm currently listening to it.  It's really good too.  This is told more from the Daisy's mother's point of view.  It's interesting finding out about the mother's relationship with her mom and then why her relationship with Daisy was not all that it could have or should have been.  I think I'll have this completed before the day is over.

I finished it and it was really good.  Healing is starting to take place and things I didn't expect are occurring.  Now I can't wait until I can get the 3rd book.  I want to see how it's going to end.

"Life in Defiance" by Mary DeMuth is book 3 in the series and I'm on the waiting list for the Kindle version of this book.  They don't have the audio version.  So far, I would definitely recommend this series of books.

1. 'In like a lion, out like a lamb'...does the first part of this saying describing March weather ring true where you live?
Yes, it most assuredly does.  They are calling for up to 8 inches of snow here today.  However, it seems as the day goes on, it is getting less and less.  Hopefully, it will miss us completely.

2. March 4th is National Grammar Day. What common grammatical error bothers you the most?
Do you mean when I make them or when someone else does.  I hate when I read my stuff a day or so later and find mistakes.  Others' mistakes don't bother me quite as much.

3. William Arthur Ward says- 'The pessimist complains about the wind; the optimist expects it to change; the realist adjusts the sails.' Which one are you?
I'd like to think I'm an optimist.  You make have to ask my husband what he thinks.

4. What's something you need to 'march forth and conquer' this month?
The estate sale for my brother's house is this weekend.  So that is one thing we are all working on.  Another is we are putting my parents on a waiting list for a retirement/nursing care facility.  We think they may be moving then sometime yet this month.  My younger sister is selling her home and buying a condo this month if all goes as planned too.  Lots of changes for my family.

5. An ongoing debate around here...do you dust first, then vacuum or vacuum first, then dust? Of the two routine household chores, which do you dislike the least? How's that for wording?
I prefer dusting first, then vacuuming.  However, we don't vacuum much anymore, because we mostly have wood and/or tile floors.  The bedrooms are the only place with carpet and hopefully, that will change this year. I hate dusting, so I'd have to say I dislike vacuuming less.  However, that being said, with my lower bulging disk issued, I have problems vacuuming and have to do it in short spurts, or I pay for it later.

6. According to thrilllist.com, the ten most photographed sites in the U.S.A. are- Cinderella's Castle in Orlando, Southernmost House in Key West Florida, The Space Needle in Seattle, The Site of the Boston Massacre in Boston, The Bellagio Lake/fountains in Las Vegas, The Lincoln Memorial in Washington DC, Coit Tower in San Fransisco, The Art Institute of Chicago, Niagara Falls, and snagging the number one spot-The Guggenheim Museum in New York City.

How many on this list have you photographed? Which on the list would you most like to visit and photograph?
I have photographed Cinderella's Castle many many times (as you probably know if you've been around here very often.  lol) I have also photographed the Lincoln Memorial (which by the way was one of my most favorite places I got to visit on my one trip to Washington DC).  As to what I'd most like to visit and photograph...probably Niagara Falls.  I'd be glad to get an opportunity to visit the Castle and the Lincoln Monument again anytime!!

7. Fifty years ago Monday (March 2, 1965) The Sound of Music premiered at the Rivoli Theatre in NYC. Have you seen the film? Do you own a copy? On a scale of 1-10 how much do you love it (or not)? Ten=best movie ever. If you're a fan, what's your favorite scene or song from the movie?
I have seen the film on TV many times.  I know own it on DVD, as it was one of the many DVD's my brother had and no one else wanted it.  I'd rate it at least an 8 or 9.  One of my favorite scenes is the puppet show singing "The Lonely Goatherd" song. I like almost all of the songs, but for some reason I've always really liked this scene.

8. Insert your own random thought here.
We started our Spring Women's Bible Study last night and we are doing "Gideon" by Priscilla Shirer.  I do believe it's going to be a really, really good one.

Kerri's Wedding Shower was on Saturday and may I just say we had a really wonderful time.  Unfortunately, I didn't take hardly any pictures.  I know Kelli did, so hopefully when she gets back home and gets settled in again, she'll send some to me and I can share them.

Kelli flew in on Thursday and then Kerri came over after work and stayed with us until her Shower on Saturday.  Of course, actually when they are both there, we really don't see them hardly at all.  They seem to spend all of their time back in the bedroom talking.  But it really is so nice to have them both in the house and knowing they are happy being together.

I worked Friday and I guess the 2 of them shopped together all day preparing for the shower.  I think it was a little hard on Kelli being in Florida and not being able to do everything until she got here.  But she did an awesome job and the shower was so very nice.

Kerri had lots of friends and family come and I think she was so pleased and happy with everyone  and with all her gifts too.  Here are a couple of pictures from the shower that I have on my iPhone.

I still can't believe that in less than 2 months she will be married.  Love this girl!