1. TV has become a part of daily life.  How much TV would you say you watch weekly? Probably a lot more than I should. Maybe 30 hours give/or take.

2. What is the earliest TV program you remember enjoying? I loved Saturday cartoons and then there was a movie with Kukla Fran and Ollie as emcees, The Real McCoys and Sky King.

3.  Everyone seems to like the TV program Yellowstone. Why do you like/dislike it or why have you not tuned in?  Do you recommend something else? I've heard of it but have never watched it.  Maybe other's comments who watch it will help me decide if I want to watch it.

4.   How many of the western programs and their stars did you watch back when westerns were popular fare on TV?  How many do you recognize? Try not to look at the list below! Gunsmoke was probably my favorite.  But I also watched Rifleman, High Chaparral and I'm not sure what else.

I didn't really recognize any from the picture.  However, after reading the list, James Garner is very familiar.

Well that's it for me.  Thanks Annie for the great questions and for bringing back some memories.

Email ThisBlogThis!Share to TwitterShare to FacebookShare to Pinterest
Labels: Tuesday4Meme

Bits of This and That

First thing on Friday I had a doctor's appointment with my primary care nurse practitioner.  All is well.  She is pleased with the progress I have made towards improving my A1C, tri-glycerides and Cholesterol numbers.  Quite frankly, I'm pleased too.  She didn't take me off any of my meds yet, but I'm hoping when I go back in 6 months she will.  I guess, it's all up to me and if I make myself stick with the changes I have made.

After that I met up with 2 of my cousins at the Middletown First United Methodist Church for a concert.  The group is called The Harps of Grace and it was 12 harpists playing and it was so enjoyable and beautiful.  I've never imagine a group of harpists before.  When I was first invited, I assumed it would be a solo harpist, but it turned out to be 12 of them.  The church was beautiful and the music was so good.  They played hymns, Christmas Carols and secular music too.  Below are a couple photos and one video clip just to give you an idea. 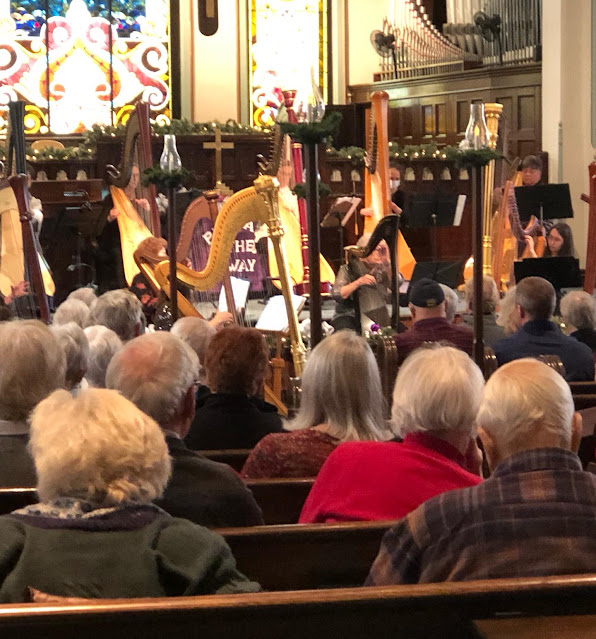 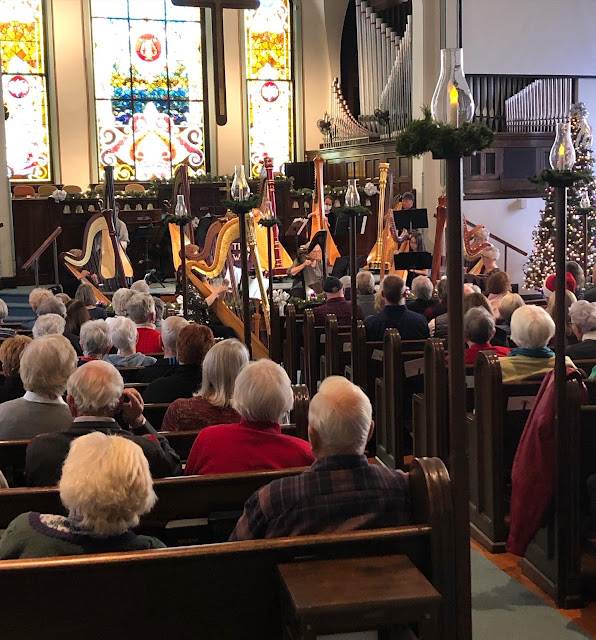 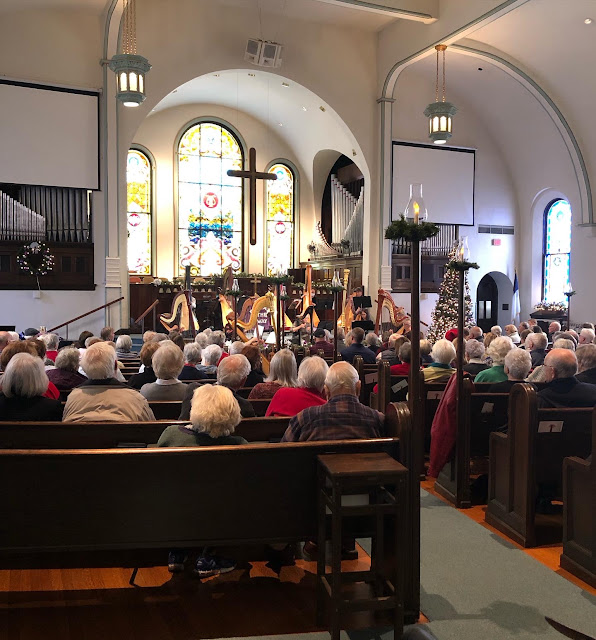 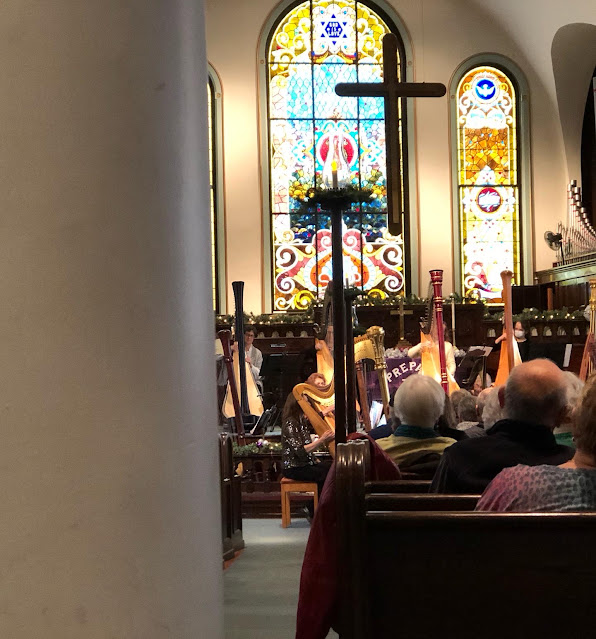 After the concert we met up at Cracker Barrel and had lunch.  That was really good too.  So Friday was a really good day.  Oh I forgot, later after dark, hubby and out went out driving and looking at neighborhood Christmas lights.  We saw some really pretty ones and then we came home and watched a Christmas movie.
Saturday we didn't do a lot.  Got some lunch and ate in the van and then I ran in to Kroger and got a few items and then we came home for the rest of the day.  I did a little more decorating and 4 loads of laundry and then, of course, we watched another Christmas movie and had dinner.  I made my first pot of Potato Soup for this winter and it was delicious!  It is the easiest soup I've ever made (and I've been using this recipe for years now).  Here are the ingredients.  Frozen Potatoes O'Brien (I believe it's a 28 ounce bag), chicken broth (32 ounce) and a packet of Pioneer Peppered Gravy.  That's it!  I'm sure you could doctor it up by adding cheese or anything else, but this is the way I like it. 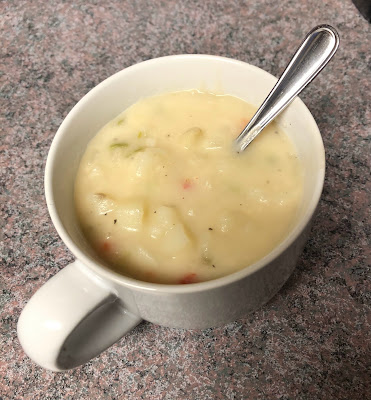 On Sunday, we had church along with a nap in the middle of the afternoon.  Hubby is currently doing a series called "O Come Let Us Adore Him".  I'll post the video below.
Thanks for visiting and I hope you have a wonderful day.
Cathy
Posted by Cathy at 1:06 PM 10 comments:

Email ThisBlogThis!Share to TwitterShare to FacebookShare to Pinterest
Labels: Bits of This and That, Photographs, Video 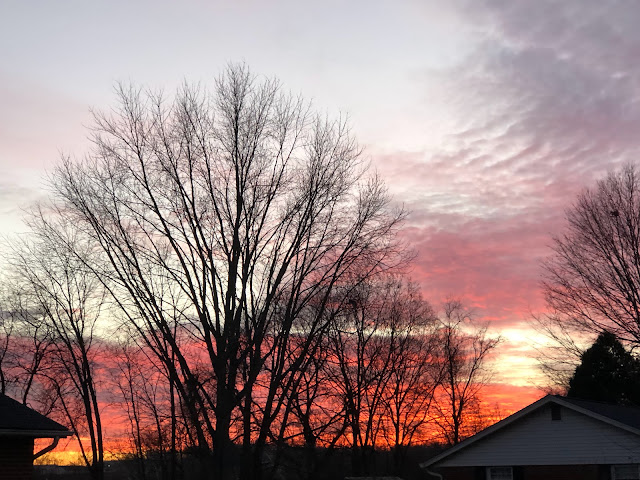 Hope you have a great weekend.

I'm sitting in my office on Wednesday afternoon and thinking about what I am thankful for this week.

***Office - speaking of being in the office, I am very thankful to have this office.  It's a place I enjoy being and I get so many things I love doing, accomplished here.

***Reading - I'm thankful that my mom passed down her love of reading.  I remember as a child she used to take us to the library quite often in the summer.  We'd all check out books (including her) and we'd go home and just enjoy reading.  I'm also very thankful for good Christian fiction writers.  They are my favorite to read, especially when it comes to the romance books, which I have been reading forever. I'm currently reading the book pictured below on my Kindle.  This is book 49 for the year and my Goodreads goal is 50.  I think I’m going to make it 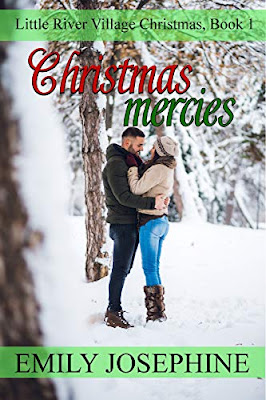 ***Retirement - It has been almost a year now.  My last day was December 31, 2021.  I just feel so blessed and when I'm asked how I like retirement, my answer is, I love it and I highly recommend it.

***My Girls - Love them both.  My oldest facetimed me yesterday to let me know she got the promotion she applied for.  I am so happy for her and proud of her too.  She loves her job and this will be a raise and will help them toward their goal of buying a home in the next couple of years.  My youngest calls me almost every day and we chat and have a good time.  She took a part-time job at a McDonald's near her son's school and I love that she's doing that.  It gives her something to do while he's at school and some extra spending money.  I'm very proud and love both my girls so much.

That's all I'll share this week, but there are so many things to be thankful for, as God has always been and will always be so good to me.

Click above to visit and link up with Joyce.
1. Sum up your November in ten words or less. How about no words, just pictures. 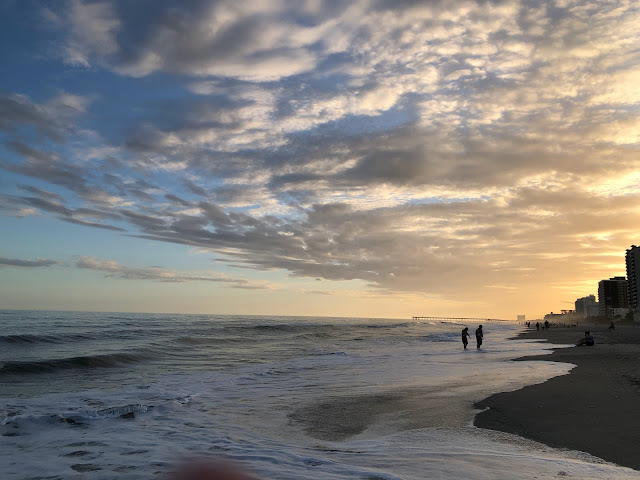 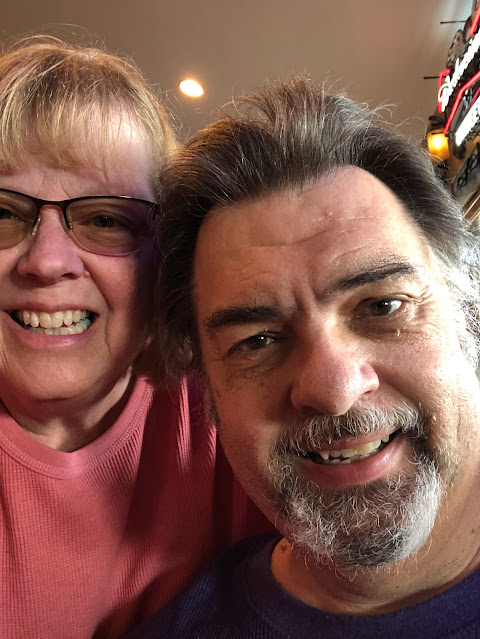 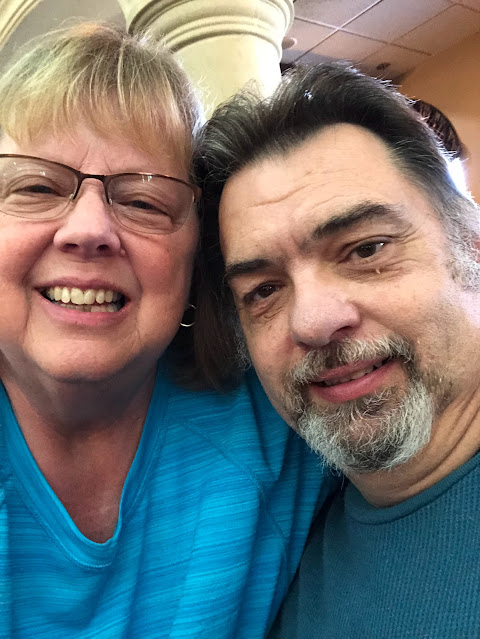 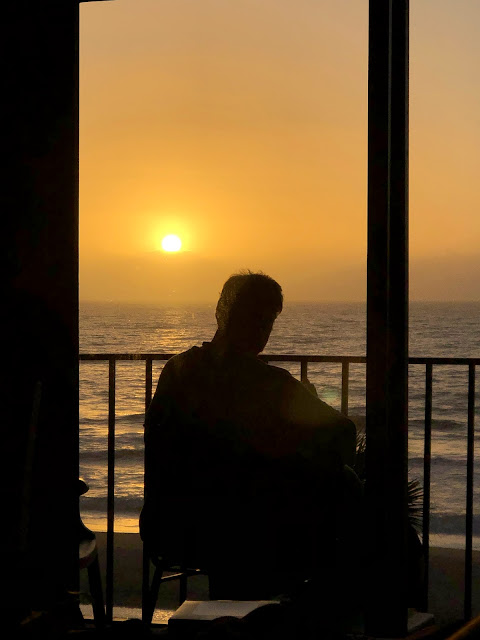 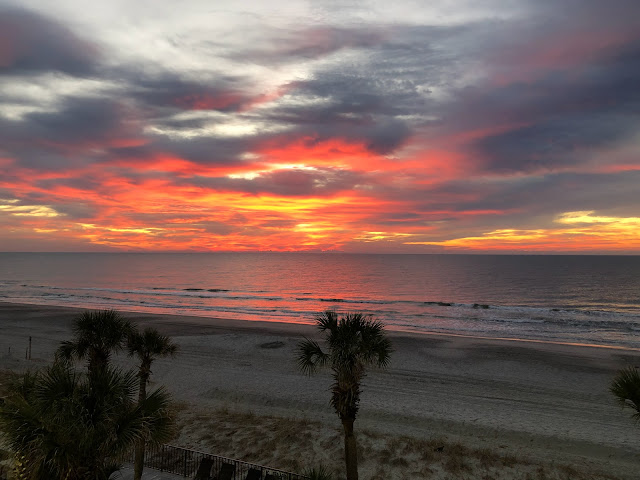 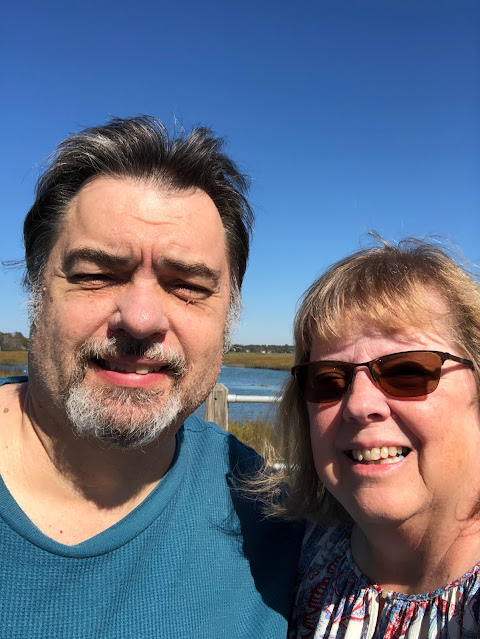 2. Are you hosting any holiday parties this year?  No Attending any? Not parties, but lunches, yes. Party pooper, party animal, or life of the party...where do you land when it comes to parties? Probably somewhere in the middle.
3. Do you purchase holiday clothing of any sort (sparkly tops, Christmas jammies, Santa suit, etc). Rarely, but I did buy these Snoozies last year. I also have jewelry (earrings and pins) that are Christmassy. 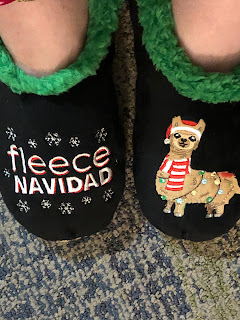 4. What's your go-to recipe when you're asked to bring an hors d'oeuvre to a party? Never been asked to.
5. December 3rd is National Play Outside Day...what might you do to celebrate? Depending on the weather, I'm considering going to the Horse Carriage Parade in our town. Here's a post I made about it in 2009.
6. Insert your own random thought here. My sister and I did some decorating of the graves earlier this week.

Thanks for visiting and if you'd like to link up with the Hodgepodge, click on the button at the top of this post.
Cathy
Posted by Cathy at 10:29 AM 12 comments: