A cool thing happened while we were in Pigeon Forge on Friday.  We went up into the Smoky Mountains and drove the circle around Cades Cove.  It was beautiful that day and the scenery there is some of the most beautiful I've ever seen.  Anyway, our ladies' Bible Study group is doing the Bible Study by Beth Moore, "Beloved Disciple"  and in the introductory video, Beth Moore told a great story.  It was about a time when she was out taking a walk alone in the mountains and asked God to delight her, to show her His glory in a way that she would know it was Him.  And He did.  I won't tell you what her delight was.  I don't want to give it away in case you should get to do this study yourself.  She then challenged us to try that some time.

So we were driving around Cades Cove and I remembered the challenge and decided to try it myself.  So I prayed out loud (I put my faith on the line) in front of Tracy and Kerri and asked the Lord to delight me and show me His glory while we were up there.  I explained to Tracy and Kerri about Beth's story and why I was praying it and I was expecting God to show me.  Of course when your in Cades Cove you're always hoping to see some wild animals (Or at least we do).  We'd seen some wild turkeys that day, but not a whole lot more.

Usually as we're driving through the mountains, if I'm a passenger I am always watching in the woods to see if I can see any animals.  I mean the woods is where they live right?  But in all my trips through there, I don't remember seeing an animal in the woods while we were driving.  Sometimes we'll see deer and even bears in the meadows, but not the woods. Anyway, this time, I really wasn't watching the woods, because it was like, why, I can't ever see them.

There was a new pull off (they had just repaved the Cades Cove Circle) and Tracy pulled off there for a minute.  Several cars drove past us and then Tracy started to pull back out and I was looking across into the woods and something caught my eye.  I told Tracy to stop because I thought I saw something. He backed up a little and we started looking and then we saw a deer and then saw there were actually 2 deer a ways back in the trees.  He pulled out onto the road and we got a little closer and I zoomed in with the camera and took a shot.  I was so excited because everyone that passed in front of us missed these 2 deer.  But God let me catch the movement of the standing deer's tail and we got to enjoy seeing them.  Then a car came up behind us and they got to see them too.

I knew if it wasn't for God having that deer move it's tail, we'd have never seen them and I knew God did that just for me.  I can't tell you just how delighted I was.  But now I want to show you the picture. 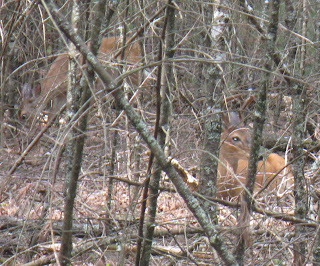 Deer zoomed in
Now the picture is not all that great, but when I zoomed it in later (like above), that deer laying down was looking straight at me.  I think that is so cool.  And no one will ever convince me that God didn't do this for me.  Just because I asked Him and He decided to give me a blessing.  Thank you God.

Now I challenge you to ask God to delight you and show you His glory.  We serve such a wonderful God!

Email ThisBlogThis!Share to TwitterShare to FacebookShare to Pinterest
Labels: God