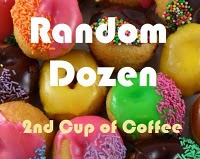 Click here to join in the fun of Random Dozen.

1. Do you believe, somewhere deep inside, that blondes do indeed have more fun? That they are "dumber" than brunettes or redheads? Be honest!
Well, I've always been considered blond (especially when I use a little Sun-In or bleach) and I know I have plenty of fun and I'm certainly no dumber than the next person.  But no I really don't believe either is true.
2. Which animal would you most like to observe in its wild habitat?
I don't know, but whatever it is it needs to be in a warm tropical climate.

3. This week the U.N. announced that Dr. Mazlan Othman has been appointed the official "Alien Ambassador," should any extraterrestrials contact us. Have you, or has anyone you know, ever seen a UFO?
Well, I've seen some things flying, that I couldn't identify, but no I don't think I've seen alien craft of any kind.

4. Name your favorite Hitchcock film.
"The Man Who Knew Too Much" with Doris Day and Jimmy Stewart


5. Would you rather spend time at the library, the mall, a craft store or home?
Home or the library

6. Which Disney princess is your favorite? (Or Disney character, if you are a guy)
Probably Ariel.  I know it's my oldest girl's favorite, but I kinda like her too. 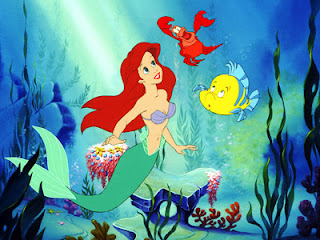 7. What kind of art is your favorite?
My daughter's art.  Check her art blog link in my sidebar.

8. How do you feel about viral videos, that is, videos made by amateurs that end up on Youtube receiving thousands of hits?
No real feeling either way.  If someone wants to make one and someone wants to watch it, more power to them, I guess.

9. Where do you buy your jeans?
My favorite jeans were given to me by my cousin, but usually I buy jeans at Walmart or Kohl's.

10. Tell me about your first automobile accident.
I've never had one (well at least not one I had to report to the police).

11. Have you ever been honest when you knew you would benefit more if you would be dishonest?
I try to always be honest (well, except for the weight on my driver's license.  I always tell them that's close enough).

12. If you were appointed "Ambassador to Aliens," what would you show and tell first about life on Earth? What would be the most difficult thing to explain?
I have absolutely no idea on this one.  I'll be curious to see what everyone else writes.