A couple of weeks ago, Tracy, Kerri and I stopped at Taco Bell for supper and noticed some people outside looking at the sky and taking pictures. It was sunny out, but sprinkling too. We figured it was a rainbow and when we left a short time later we actually saw that it was a double rainbow. We headed towards home and kept looking at and talking about the rainbow. One of them was so bright and the other wasn't bad either. My daughter kept asking, Mom do you want me to take a picture and I said no that's ok. But finally I told her yes and to get the camera out of my purse, which she did. Then hubby said you could turn here and get a picture if you want. I decided not to, but then drove just a bit further and turned into a cemetery and that's when we saw the rainbow line up right behind this cross. I parked and jumped out of the car and took a couple of pictures. I'm so glad I did. 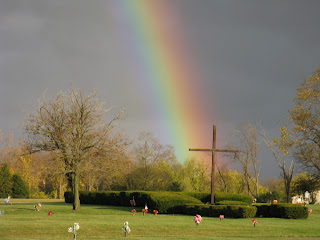 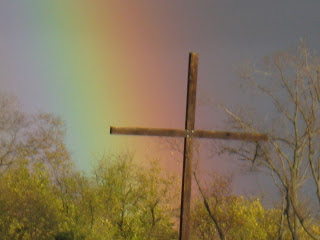 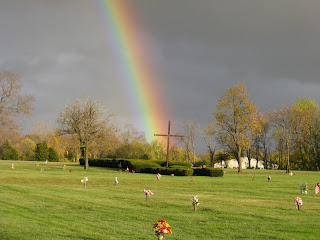 When I see a rainbow I always think of the promise of God never to flood the whole earth again. And then the cross reminds me of God's promise to redeem us if we'll just believe in and accept His Son as our Savior. I love these pictures because they have both, God's rainbow and His cross. Thank you Lord for your beautiful creation and for giving your Son for me. Wow! You truly are awesome!

Email ThisBlogThis!Share to TwitterShare to FacebookShare to Pinterest
Labels: Photographs, Thanks