1. The popular saying, 'All is fair in love and war' is originally credited to English writer John Lyly. Is he right?
No, I don't think so.

2. Are you a cereal eater? What's your favorite kind?
Yes, I like cereal and my favorite kind is probably Fruit Loops and Lucky Charms.  I also like Raisin Bran Crunch and Frosted Flakes (as you can see, mostly anything that has lots of sugar).

3. A five year old in Pennsylvania was recently given a ten day school suspension for talking with a friend about shooting one another with a Hello Kitty Bubble gun (the gun blows bubbles). She did not have the gun with her at school.

A psychological evaluation was also ordered and the incident was recorded on her permanent record. The suspension was later reduced to two days and her parents are suing to have the incident removed from her file. Your thoughts? (If you missed the story click here for details).
As the newscaster says, we don't know exactly what the child said, but it sounds pretty bogus to me.  I mean come on, it's bubbles.  Just from what they said in that newscast, I would say she doesn't deserve a suspension, nor should it be a permanent record in her file.  However, that being said, I suppose there could be more to the story that what they are releasing.

4. Whatever happened to my mind? I believe it is totally missing some days!

5. January 23rd is National Handwriting Day, billed as a day to reacquaint yourself with a pen and pencil. Do you like your handwriting? Do you prefer to print or write in cursive? This date was chosen because its the birth date of John Hancock. What's the last thing you signed your name to?
I don't really like my handwriting, but I don't mind my printing.  I prefer printing.  The last thing I signed was my time sheet at work.

7. Share something funny you've heard a child say.
My oldest used to call country music, crunchy music and pancakes were pantycakes.  We still use both today when we want to give her a hard time.

8. Insert your own random thought here.
More things to give "thanks" for:
26. a nice warm house to come home to when it is sooooo cold outside.
27. a pretty good report from the doctor at my check-up.
28. reading the Bible through chronologically for the first time and I'm up to Joshua.
29. a wonderful supper of ham and beans last night.
30. beautiful falling snow 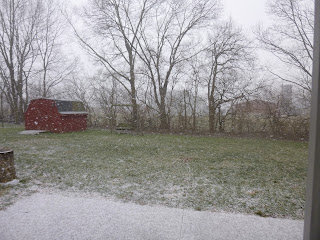 31. and that it didn't accumulate any more than this. 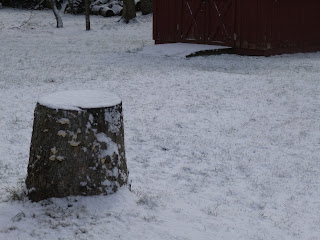 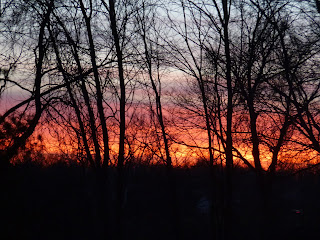 Don't forget after you make a comment to click on the Hodgepodge button above so you can visit others and hopefully play along with us.

Email ThisBlogThis!Share to TwitterShare to FacebookShare to Pinterest
Labels: Hodgepodge, Meme, Photographs, Thanks