Totally enjoyed this weekend, although I wouldn't have minded if it was a little warmer.  But at least part of the time we had blue skies and sunshine.  Thank you God!  Hope you all had a really great Mother's Day!

After work we drove up to a nearby town and picked up some City Barbecue for dinner and it was delicious.  On the way up, I noticed the sky.  To the north of us the skies were blue with big white clouds, but just to the east of us they were dark and foreboding. 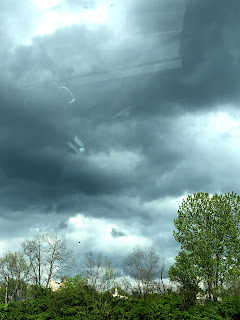 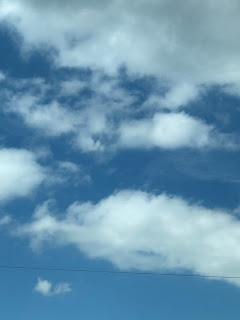 Saturday afternoon we were out for a drive and were going to pick up some lunch.  We passed this apple orchard and I just thought this picture was so pretty.  I love blue skies with big white clouds. 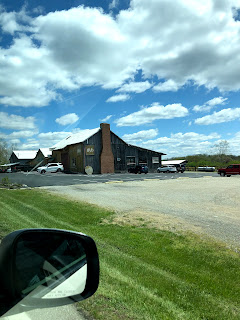 I went to my sister's after lunch and we took a walk together and then sat out on her front porch and just talked for a bit.  I rather miss being with my family and this was really nice.  It was a little cool, but still so nice to be together.

After I went home, I took the dog out for a walk and video chatted with Kerri.  Colton was having a problem with one of his toys, so he brought it over for her to fix it.  She's such a good mommy and mostly so patient with him.  I'd love this picture better without me up in the corner, but I love how intent they were on fixing his toy. 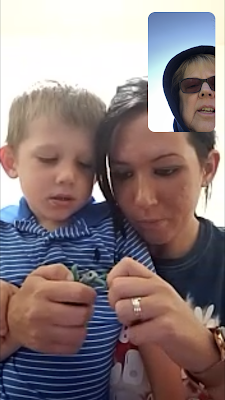 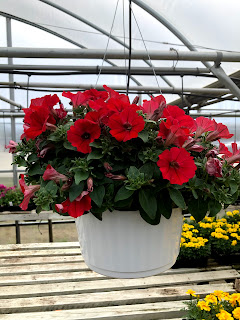 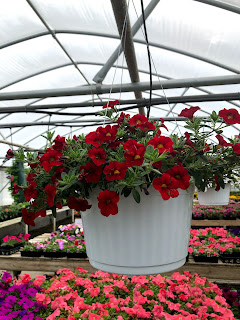 After Tracy finished his FB Live sermon, we stopped at one of our local nurseries.  I bought the basket on the right for his mom for Mother's Day and I think I'm going to go back and by 3 of the one on the left for my front porch.

We headed over to his mom's and sat and talked with her for awhile.  It was so nice to see her face to face.  We've been over once or twice to drop stuff off, but never went in.  It was just so good to sit and talk to her and just be "normal" for a change. Mind you, we did keep our distance (basically sitting in different corners of the room) and no hugs or anything.

While we were there, Kelli face-timed me so she got 2 for the price of one.  Her grandma and I both got to talk to her.  So much fun  Then I called Kerri and she got to "see" her grandma.  Colton was outside playing, but he came over for a minute and said hi!  He was too busy playing with his friend to be bothered to talk to his great grandma for very long.  But a little is better than nothing.  lol

So that's pretty much my weekend.  How was yours?