Saturday morning hubby and I were heading out to meet my sister and her husband to see a movie and have lunch together.  As we drove through our small town, we were stopped by this.  There was an accident and Careflight was called in to transport a patient.  Now, I work for our local police department and have even been responsible many times to dispatch these people, but I had never seen them in action from this side before.  It was very fascinating.  If you look closely, you can see that the pilot is still in the chopper.  There were 2 women working with him and at this time they were getting the patient.  After they were all loaded, the chopper went straight up (almost directly over our heads) and then took off to the hospital.  I really admire the men and women who work so hard to save the lives of so many people.  And I just want to take this opportunity to recognize the Careflight workers, the police and the firemen for all they do for us as citizens.  I happen to know that the citizen that was taken this day is going to ultimately be alright.  They survived a pretty bad accident because of all the great care that was given. 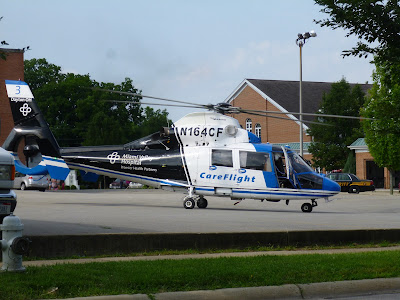 Email ThisBlogThis!Share to TwitterShare to FacebookShare to Pinterest
Labels: Photographs, Thanks